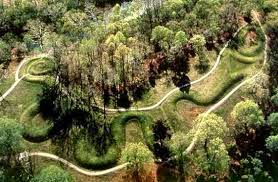 One of my past workings I wanted to share is my Morrighan workings at Serpent Mound. Luckily I only live a little over an hour from there so I've been able to do quite a bit of magickal work with this power center. The first time was during the Winter Solstice Dec. 21, 2012. The second time was last October 8 2014 during the Lunar Blood Moon Eclipse. I will be discussing this in 2 parts. The first will be a brief overview of serpent mound and the energy there of, along with a break down of how each guise of the Morrighan coordinates with the lunar cycle and of the energy work I was performing. The second part will be going over the energy work itself and the end result.

Part 1:
Serpent Mound is one of the few ancient sights on the North American continent that are a playground of magickal energy, a power center just as much as Stone Hedge or Newgrange. However, technically it can not be classified as a megalith but it is one in it's own right. The Ohio Valley is littered with giant burial mounds The picture above depicts the quarter mile long earthen serpent.
Here is a brief overview of it from Wikipedia
"Including all three parts, the Serpent Mound extends about 1,370 feet, and varies in height from less than a foot to more than three feet. Conforming to the curve of the land on which it rests, with its head approaching a cliff above a stream, the serpent winds back and forth for more than eight hundred feet and seven coils, and ends in a triple-coiled tail. The serpent head has an open mouth extending around the east end of a 120-foot -long hollow oval feature. Scholars posit that the oval feature symbolizes an egg, the sun, the body of a frog, or merely the remnant of a platform. The effigy's extreme western feature is a triangular mound approximately 31.6 feet at its base and long axis. There are also serpent effigies in Scotland and Ontario that are very similar
Origin
The dating of the design, the original construction, and the identity of the builders of the serpent effigy are three questions still debated in the disciplines of social science, including ethnology, archaeology, and anthropology. In addition, contemporary American Indians have an interest in the site. Several attributions have been entered by academic, philosophic, and Native American concerns regarding all three of these unknown factors of when designed, when built, and by whom.
Over the years, scholars have proposed that the mound was built by members of the Adena culture, the Hopewell culture, or the Fort Ancient culture. In the 18th century the missionary John Heckewelder reported that Native Americans of the Lenni Lenape (later Delaware) nation told him the Allegheny people had built the mound, as they lived in the Ohio Valley in an ancient time. Both Lenape and Iroquois legends tell of the Allegheny or Allegewi People, sometimes called Tallegewi. They were said to have lived in the Ohio Valley in a remotely ancient period, believed pre-Adena, i.e., Archaic or pre-Woodland period (before 1200 BCE). Because archaeological evidence suggests that ancient cultures were distinct and separate from more recent historic Native American cultures, academic accounts do not propose the Allegheny Nation built the Serpent Mound.[5]
Recently the dating of the site has been brought into question. While it has long been thought to be an Adena site based on slim evidence, a couple of radiocarbon dates from a small excavation raise the possibility that the mound is no more than a thousand years old. Middle Ohio Valley people of the time were not known for building large earthworks, however; they did display a high regard for snakes as shown by the numerous copper serpentine pieces associated with them

In 1987 Clark and Marjorie Hardman published their finding that the oval-to-head area of the serpent is aligned to the summer solstice sunset.William F. Romain has suggested an array of lunar alignments based on the curves in the effigy's body. Fletcher and Cameron argued convincingly for the Serpent Mound's coils being aligned to the two solstice and two equinox events each year. If the Serpent Mound were designed to sight both solar and lunar arrays, it would be significant as the consolidation of astronomical knowledge into a single symbol. The head of the serpent is aligned to the summer solstice sunset and the coils also may point to the winter solstice sunrise and the equinox sunrise.

If 1070 CE is accurate as the construction year, building the mound could theoretically have been influenced by two astronomical events: the light from the supernova that created the Crab Nebula in 1054, and the appearance of Halley's Comet in 1066. The supernova light would have been visible for two weeks after it first reached earth, even during the day. The Halley's Comet's tail has always appeared as a long, straight line and does not resemble the curves of the Serpent Mound. Halley's comet appears every 76 years. Numerous other supernovas may have occurred over the centuries that span the possible construction dates of the effigy." 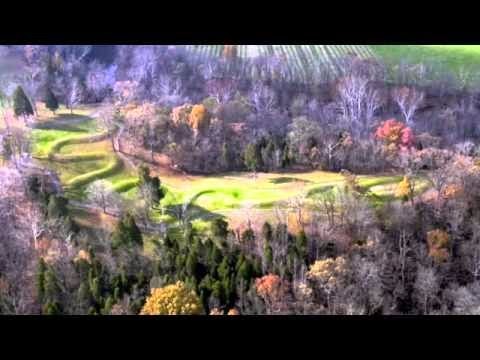 So as you can see, to be able to do magickal work here with The Morrighan was an opportunity I couldn't pass up. Especially with her connection with serpents, spirals and the moon. The energy projected at the mound is very ancient and any strong empath (like myself) can't help but get that 'spiritual high' while in the area. I'm beginning to understand that a lot of this work I have done here, although very important as to the advancement of our Great Mother's system of magick is but a prerequisite to the work I am to perform latter this summer in Ireland.
The type of work I did was what is called The God Form Ritual. This involves working with sacred sound with visualization. It is similar to the Golden Dawn's 'Middle Pillar' and the Aurum Solis's 'Deific Formula.' The Middle Pillar can be found in almost any Golden Dawn Book and the Deific Formula was published in Denning & Phillips 'The Foundations of High Magick.'  In the Rune-Gild we also had something similar called 'Yew Working'. All 3 of these is a series of vibrating sacred names aloud as you are projecting down energy from the heavens into your own being and then vibrating the appropriate god name over each chakra and/ or energy center in the body. With Yew Working it was a bit different, in that you drew the energy from above and then also drew energy up from the earth below where it would meet in the middle at the solar plexus vibrating the runes over each energy point. See diagram below: 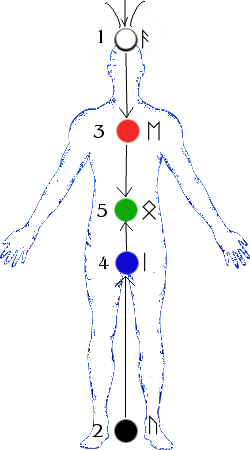 In this case I was vibrating the 'Morrighan.' Since 2008 I have been doing a moon-cycle ritual once a year for an entire phase of the moon with all of The Morrighan's guises, vibrating each name as they correspond with the moon phase. For example: I would start on the last quarter Moon and it would go as follows:
Badb = Last Quarter Moon
Nemain = New Moon
Macha = First Quarter Moon
Morrighan = Full Moon
Danu = the following day at noon
So in this manner I was able to manifest her and evoke her within myself and actually be a part of her being, to become one with her. I also should add that after each guise I worked with I had to reflect on the guise for the week of that moon phase and see how it corresponded to my everyday life and do a daily adoration to that guise. Doing the Morrighan at the end was the full circle of the whole and then her light aspect of Danu 'the light within her heart', the mother and the land, that which flourishes in the light and gives life. The whole moon-cycle ritual embodies the death, birth, life and then being reborn again. After this work I was to start working with her as Anu from then on out. Anu being her true name and the Morrighan being her title, just as Siddhartha is 'The Buddha' and Jehovah being the name of the Judeo-Christian god and 'God' as his title. The name Anu breaks down to being such a powerful goddesses name when vibrated. I found it being more powerful than all the other names of hers I've worked with. When invoking her as Anu or addressing her in this name the work of her followers will find their relationship will become even more personal. However, a word of warning: I would not address her in this name until she gives you permission to do so. While we all feel a deep personal connection to her, I assure the relationship gets even deeper and goes beyond that of which lays on her surface image of the Battle Queen. For one must fight through the darkness of life and of the soul to see the true light of the goddess especially when you visit her on her plane. This is a point where you stop becoming and start being. It is very important to remember that she is not just darkness and war but she is also light and rebirth. Anu being the result of that circle. It is our goal as sentient beings to become god or goddess like. The gods are our teachers, our guides. We are not separate from them nor are we meant to bow down and worship them. We are here to learn from them as they stand as our role models. Even with our mother as a 'Great Queen' it's about honor and respect as you would treat any great teacher and/ or parent. However it is fear that keeps people scared of her and continue to bow to her as a servant. This 'fear' has been a state of stagnant for a lot of folks because it clouds our judgment in our spiritual progress. Remember it was 'fear' that controlled the Age of Pisces with the Christian mindset. That was how the cult of Jesus survived, fear of eternal damnation. Now we are at the dawn of the Age of Aquarius, mankind is getting smarter and more spiritually aware. The old gods are returning to reclaim their own. So fear should not be the central focus of this new age. Fear should be replaced with knowledge and wisdom. The 'fear' of the Morrighan is only a stepping stone, the first challenge to overcome to open the doorway. This will be discussed latter in the future but for now let's get back to the topic at hand.

The God Form Ritual. The overall purpose of the ritual is to bring her energy into your own being and become one with her. It goes as follows