Work of the Symbol

Devotional Practices of the Morrighan

"Because there are innumerable things beyond the range of human understanding, we constantly use symbolic terms to represent concepts that we can not define or fully comprehend. This one reason why all religions employ symbolic language or images. But this conscious use of symbols is only one aspect of a psychological fact of great importance: Man also produces symbols unconsciously and spontaneously, in the form of dreams."
-Carl G. Jung


The symbol you see above shall be the focal point of the first part of this working. This is the symbol of the Morrighan. To break it down, let us examine it. First, the Triangle. The upside down triangle with a line through it's center is the alchemical symbol for Earth. The Morrighan is associated with the Earth and is an earth Goddess. She is part of the land as much as she IS the land. She grants
sovereignty over it. In the guise of Macha, Macha means 'pasture' or 'field', which is a is clear indicator of her as an Earth Goddess. On Samhain, the Morrighan lays with The Dagda to fertilize the land. The Morrighan being the Goddess of Death and The Dagda being the God of Life and both are Earthly based, they mate at the time of year when we reap our harvest but the land is dying for the coming of winter, yet it will be reborn in spring. Our harvest gives us nourishment, sustenance and life through this time of year, through this time of death of the land. The three lines was an ancient symbol of the Morrighan as archeological records have indicated. Various ancient Celtic artifacts have been found with these three lines engraved on them that were translated as a symbol of the Morrighan.
The Red Triangle in the middle has a few meanings. First, the Morrighan as a War Goddess is where the element of fire comes in. The Alchemical symbol for fire is a red riangle. Fire represents our courage, our actions and our desires. All the things the Morrighan embodies. Thus we have the element of Fire. Now to go even further into this, the red triangle in the center also is the light, the light of the sun, the light within our hearts which is Danu (Anu). Fire is the light. It has been said the Morrighan first appears as fearful and chaotic only to scare those away who are not serious about her.
For when they overcome this fear of her, they find a loving, compassionate mother. But one must go head first into the center and overcome your fears in order to be at peace.
The triple spiral. Some will tell you it is a just a triple goddess symbol but is far more than just that. The symbol appears on most of the ancient megaliths through out Ireland. Most notably on Newgrange. While it is a triple goddess symbol it is the cycle of the universe, life death and rebirth. The Celts strongly believed in reincarnation, which is a main reason why they had no fear of death. They believed that they would be reborn in the same tribe. Then we have the guises of the Morrighan, Badb, Macha, Nemain. It could be suggested that each one is not just a guise but a reincarnation of
Danu, since the Morrighan herself is associated with reincarnation and rebirth. And when you start studying more into her family tree, this reincarnation into the tribe concept becomes more clear of her different guises. It is also suggested that there is a bit of numerological significance in the number of rings in the spirals that has several correspondences as well but that is a little more in depth than we will be covering at this time. Thus the triple spiral is one of her oldest symbols, the spirals all connect with each other to make a whole. Nemain, Macha, Badb together as one make up the
Morrigu with the light of Anu shining through the center.

Practice
The first practice with the symbol should be done over the period of 3 days each. When the moon is waxing and should not exceed past the full moon. To get started, use the picture of the symbol below and print it out if possible. It will help to hold it front of you or if you can manage to tape it to the wall to keep your hands free. It is a good meditation practice to stare at the picture for a period of time and then close your eyes and try to see it. Also you can stare at the picture for 20 seconds then close your eyes for 20 seconds seeing the symbol and then reopen your eyes for another 20 seconds and then closing them again, repeating this several times.

Always recite the 'Hymm to Morrighan' at the beginning of this work while facing North.

2. For the second part of this exorcize you will now focus on seeing the spirals in the symbol move. See them spiral into one another as if each spiral fills the other in a eternal circle. After a brief period see the red triangle in center begin to glow brightly. Be sure to record any sensations or feelings you get from this in your personal journal.

3. At the third part you will be doing a ritual for the symbol which is printed on the next page. This should be done on or near a full moon. It is always good to fast for the day before this ritual if you are able. Any corresponding incenses is also helpful during this ritual. 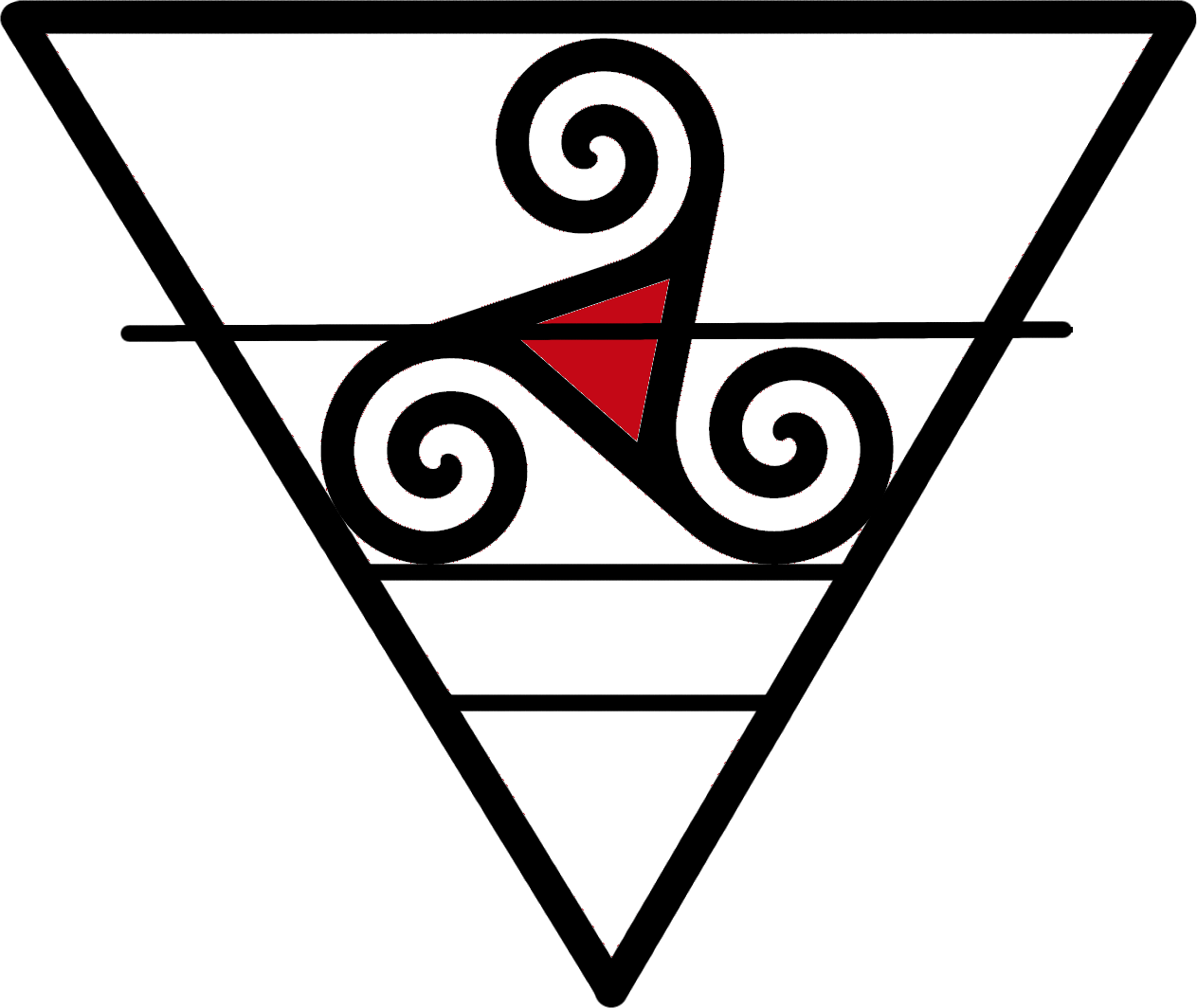 Ritual of the Morrighan Symbol
1. Do your customary opening ritual.

2. Stand facing North and recite the Hymm to Morrighan (I have the one we use on this blog or you could write your own)

3. See the Morrighan standing before you, then speak the following adoration:

Oh, Great Queen Mother
Morrighan
Anu
I stand before you this night,
to unite my consciousness with yours.
To feel your love, your power and your embrace
within my heart,
So that I may rejoice with you
as your child and your devoted follower.
I shall greet you with open arms and an open heart!
I shall now bring your symbol into myself.

4. While standing visualize the Morrighan symbol move in slowly from the West. See it as sparkling Silver color. It stops just in front of the heart.

5. Now see the symbol move in from the East and it is shiny gold Color. It moves slowly to rest just in front of the heart and mold into the silver symbol.

7. Now see the symbol up in heavens where it is a bright white light and it descends downward to rest in front of the heart and molds into the previous symbol so all 4 become one and begin to glow a brilliant cosmic light of unity.

8. As you gaze at this symbol vibrate the name 'ANU'

10. Speak the following:
Sacred, Great Queen Mother, Morrighan, May the union I have just created with you be sealed and flourish through every level of my being, bringing all the beneficial effects under your control. May I feel your love when needed, may I see your presence when lonely, may I hear your voice when you wish to communicate, may I be strong when you wish to test me,
may I have courage when you wish to show me fear, may my will stay focused when you show me my desires.

12. Sit and meditate for a few moments and then record your experience in your journal.

13. Do your closing ritual